Is the formal ‘suited and booted’ office dress code extinct?

We’ve been drifting away from formal office dress codes for years. The pandemic may have finished them off for good.I

If you didn’t buy any new clothes during the pandemic, you’re far from alone.

In the UK, clothing sales plummeted 25% in 2020, the largest annual drop since record-keeping began 23 years ago. The picture was similar in the US, where fashion companies saw a 90% decline in profit in 2020. Particularly hard hit was the business-fashion sector, as workers swapped offices for their homes, in-person meetings for Zoom – and downgraded their outfits accordingly.

Now, as vaccine rollouts move many countries closer to returning to the office, many of us may be realising it’s time to sideline our athleisure and slip into something a little more presentable.

This realisation might be particularly acute, and indeed unwelcome, for people employed in sectors where formal attire – like business suits, ties and high-heels – is more common. Yet we’ve been drifting away from these kinds of office dress codes for years, and experts believe that the pandemic will have further reduced the need for this kind of attire.

As we transition to the post-pandemic era and its new forms of flexible work, companies may well focus more on functionality – and care even less about staff showing up in formal office wear.ADVERTISEMENT

It’s abundantly clear that the pandemic has accelerated a long-standing discussion around whether business attire is still relevant. Lockdowns were barely a few weeks old before we began prognosticating about the future of slacks and blazers. By May, we were already debating why the office dress code should never come back, or whether the suit was finally dead.

At first, some experts encouraged us to dress up for work video calls anyway, as it could bolster our mental health and increase our sense of purpose and productivity. (Most of us dropped that pretty quickly, though). Instead, during the past 18 months, most of us have worn what’s comfortable – and the overall consensus is that we’ve been pretty productive, regardless.

That’s a far cry from the idea that to do your best work – and cultivate the best impression – you need to look the part. That kind of thinking dates back to the Victorian era, when professional, educated and wealthy men wore wardrobes of velvet and fur, which signaled status and influence. 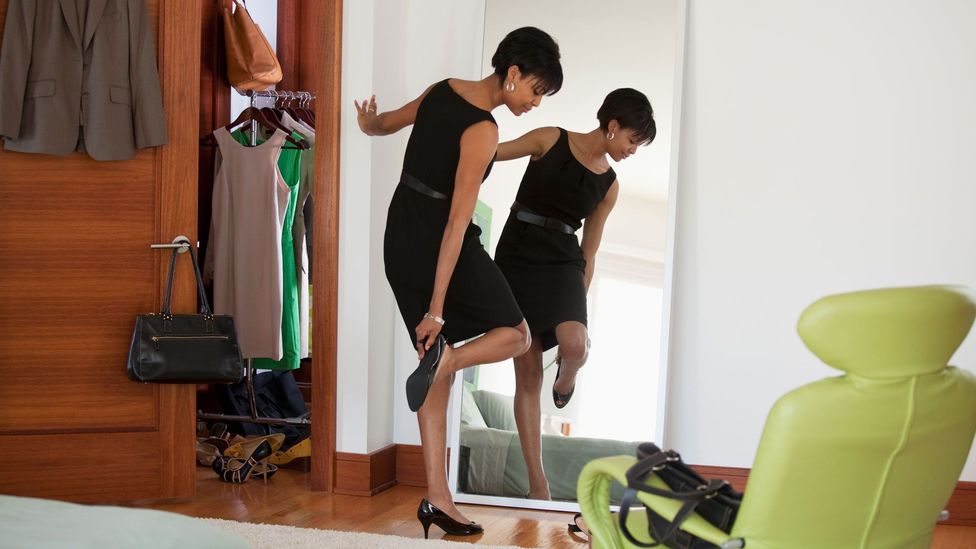 Some workers are even finding they’ve gained time back in their schedules, not having to primp for maximum ‘presentability’ (Credit: Getty Images)

Raissa Bretaña, fashion historian and adjunct professor of art history at the Fashion Institute of Technology in New York City, says that from the 19th Century to the post-war years, tailormade suits were the norm for both working men and men of leisure – and, eventually, women of the same classes. “It was only in the later part of the 20th Century – when dress became more casual and democratic – that the idea of the ‘business suit’ became almost exclusively associated with white collar workwear,” says Bretaña.

Our obsession with business suits peaked sometime in the 1980s, with the rise of the ‘power suit’: the outfit that defined the ‘greed is good decade’ and communicated wealth and power even in pop culture, whether it was the movie Wall Street or the TV series Dynasty.

Back then, says Lisa Hayes, associate professor and director of Drexel University’s fashion design programme in Philadelphia, US, more women were wearing the ‘masculine’ jacket-and-slacks suit, because in male-dominated workplaces, women thought “if I need to sit in the boardroom across the table, I need to be a mirror image of [the men in the room]”.

But even as bankers, financiers and other white-collar workers poured earnings into sharp attire, a push toward more casual dress codes was already beginning.

It started back in the 1960s with ‘casual Fridays’ featuring blue jeans and Hawaiian shirts, and kicked into an even higher gear with the rise of Silicon Valley, the Zuckerberg hoodie and the idea that success didn’t need to come buttoned up in a suit and tie. Suits – which once symbolised professionalism – became associated with more traditional companies, as tech workers who trumpeted innovation redefined what a CEO should look like.

Even in the most formal of sectors like finance, dress codes have been somewhat toned down: in 2017, Goldman Sachs started relaxing expectations for its IT employees due to the “changing nature of workplaces” and made the policy company-wide in 2019. A 2019 survey suggested that half of US companies allow casual dress.

This broad trend has been reflected in the office attire industry, which has been in dire straits for years. Necktie sales in the US hovered below $2bn (£1,45bn) in 1995, but sunk to $850m in 2014; between 2015 and 2019, the country’s suit market shrunk by 8%. Suit sales in the UK had been steadily dropping every year since 2017. And the pandemic just sped these trends up. High heels sales plummeted 45% in 2020. Brooks Brothers, the 200-year-old US menswear chain that outfitted nearly all the US presidents and was a long-time fashion go-to for financiers, filed for bankruptcy last summer, after years of slumped sales.

Post-pandemic sales in the work-fashion industry probably won’t be helped by the fact that many companies plan to embrace a hybrid future – with staff doing some days at home and some in the office. Such a transition will have implications; staff will need fewer office clothes, of course, but more importantly, it would indicate a significant shift in employer thinking.

“I think people are going toward a more functional approach – what you get accomplished, not these formal rules about the number of hours you’re in the office, or how exactly you’re dressed,” says Robert Pozen, senior lecturer at the Massachusetts Institute of Technology.

He suggests that the flexibility that will come in terms of office attendance might trickle down to what you’re expected to wear. “[Workers] don’t want some rigid dress code. There weren’t a lot of organisations that required ties and jackets before the pandemic on a daily basis, and so now you have even fewer – and the general movement toward a functional approach rather than a formalist approach.”

That may mean that you may only be wearing business casual a few days a week, when you actually go into the office – but even then, you might only need to “dress up” when you meet with people from outside the company, says Pozen: think clients, visitors or when you give an external presentation of some kind. 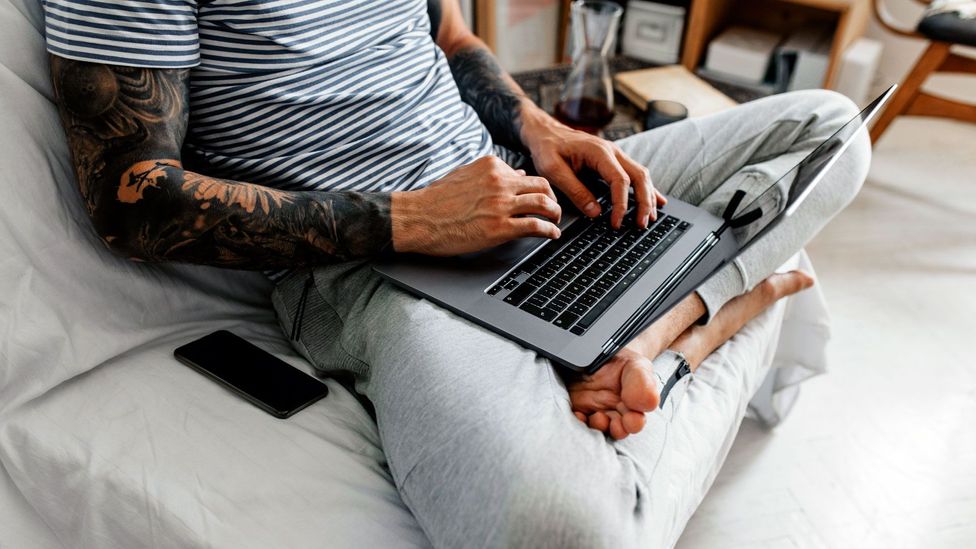 With the past year-plus of remote work, employees have indulged in the comfort of casual wear – and aren’t rushing back into their formal attire (Credit: Getty Images)

Bretaña agrees: “I think post-pandemic changes in office dress codes will depend largely on how frequently workers will be expected to be present in a physical office space,” she says.

Some of it will also depend on the individual, however. Pozen thinks some people will still “will want to look nice”, while Bretaña thinks dressing more presentably could help people draw more of a line between work and home. “If the work-from-home hybrid model persists, I expect to see a return to formality for in-person office meetings, as people are forced to make a distinction between their private and public work personas,” she says.

Of course, there will be lines people won’t cross. “You can’t go in with shredded sweatpants,” says Hayes. But people will also learn from the pandemic. “Some people are going to be saying, ‘I learned to be comfortable, I gained 45 minutes of my life back [not primping as much in the morning], I’m going to go into work and do a terrific job, and this is how I dress,” she says.

Moreover, if companies have learnt anything from the upheaval, it’s that employees prefer flexibility and, in general, will use that flexibility to be more productive. “You don’t want to have dress codes just for dress codes’ sake,” says Pozen. “The question is, does it help produce the results you want?”

Speaking for myself, on the occasional days that I do go to the office, I’ve actually found myself getting more dressed up than I did before. There was something fun and different about donning wingtips and slacks after 15 months of loungewear. It almost felt like I was getting ready for a special occasion.

Of course, that feeling of novelty could wear off over the next few months. But shaking the effects of 18 months working in our jogging bottoms may prove harder overall. If we didn’t before, we certainly now understand that productivity and professionalism don’t need to come packaged in a suit – knowledge that will likely lead to discernable shifts towards more informality as we return to offices